Earlier this year, in January, Bandai Namco Entertainment announced “Dragon Ball Game Project Z” at the Dragon Ball World Tour FighterZ finals in the United States. Along with the reveal, they released a trailer. This confirmed the title would be an action RPG, and would retell the Dragon Ball Z story.

I know, they have told this story many times over the years in various different titles developed by the likes of Spike Chunsoft, (formerly Spike) & Dimps –  those were all fighting games, and the handful of titles that weren’t, such as the Legacy of Goku series on the GBA, will come nowhere near this ambitious project. Developed by Fukuoka based CyberConnect2 (Asura’s Wrath, Naruto Ultimate Ninja Storm Series & .hack) this title promises to retell the story in the most faithful way possible.

The announcement trailer showed us Goku battling arch nemesis Frieza, and also traversing the much loved Dragon Ball world – we saw Bulma’s Capsule Corp. and Master Roshi’s Kame House – which sparked a lot of excitement within the fan base, as in previous titles, we’ve not really had the ability to explore the world before, certainly not in this way.

We then had a long wait for further info until the Microsoft Press event at E3 where the official title was announced as “Dragon Ball Z: Kakarot” and a trailer was shown, confirming an early 2020 release window. This time, we were shown footage taken from the Saiyan Arc – the arrival of Vegeta and Nappa, to Goku’s return to help his fellow Z Fighters against the Saiyan duo. Also, we were shown more of Goku’s epic battle Vs. Frieza on planet Namek. Lastly, famous Dragon Ball mangaka Mr. Akira Toriyama offered some words on the game as seen below. 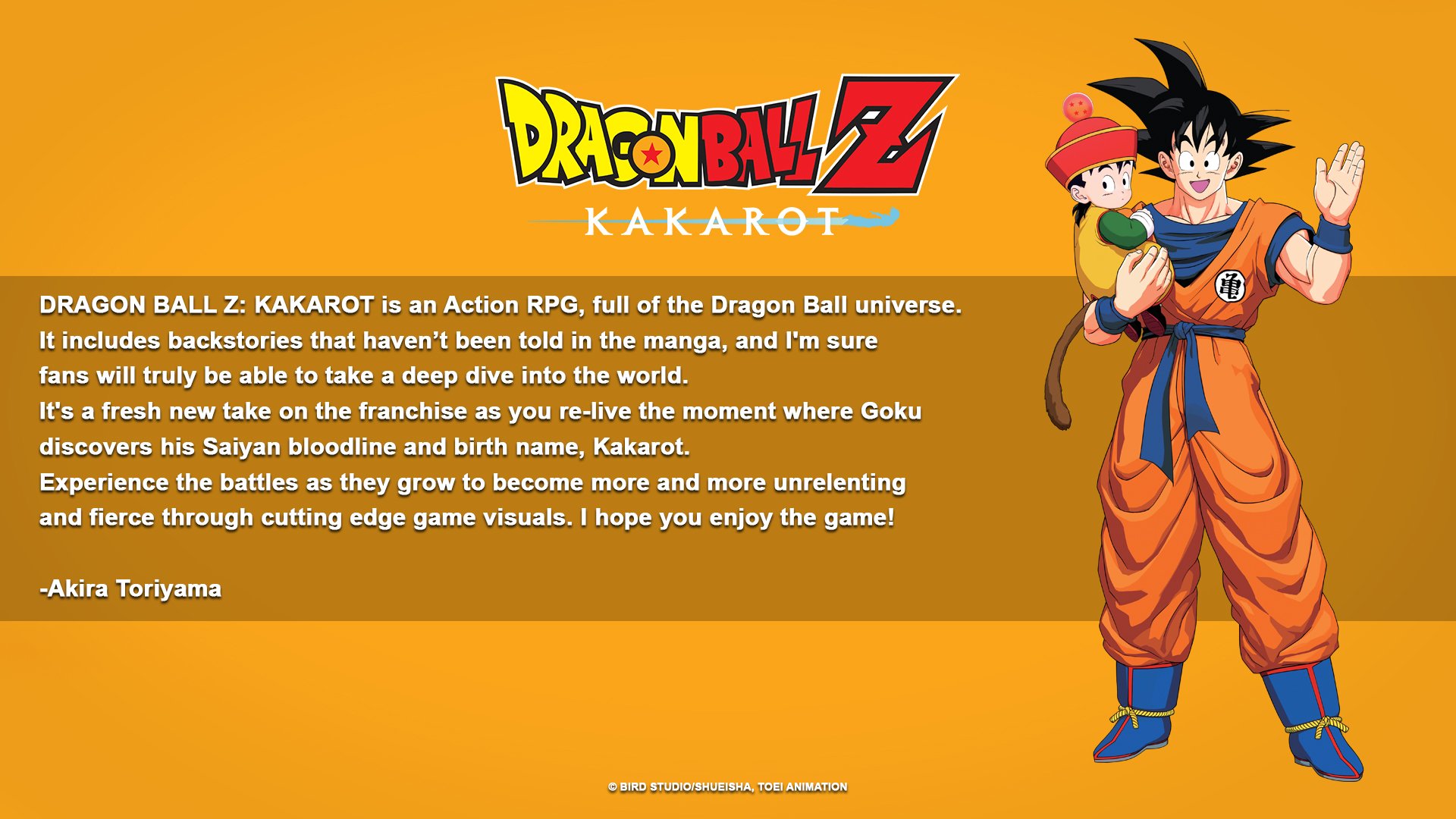 Game World
This time, the producers are Ryosuke Hara from Bandai Namco Entertainment, and Kazuki Kimoto from CyberConnect2. During E3, IGN’s Max Scoville interviewed the producers and also showed off some footage from the game. We were shown a lot of features never before seen in a Dragon Ball title before – for the first time in a Dragon Ball Z game, we will have the opportunity to either fly, or run (choice is yours) within the world.

Whilst you travel, there are many things you can do in order to level up Goku – there are activities, such as fishing using Goku’s attachable tail (he lost it in the original Dragon Ball series) and hunting animals for meat – which is actually a big part of the game. By fishing and hunting animals/dinosaurs, etc. you can collect their meat and cook it in a variety of different ways, which will permanently change how Goku plays, through his parameters and stats.

Also, you will be able to ride on the nimbus cloud, just like Goku does in the anime. There will also be missions where you will meet other characters from the Dragon Ball world, some for the first time in Dragon Ball Z – such as Android 8, who only appeared in the original Dragon Ball series – since this video, we have seen Yajirobe, the Pilaf gang and for the first time ever, there will be a driving test mission taken straight from Dragon Ball Z filler! Once you have your license, you will have the option to go wherever you want in your car. It is much faster to fly, however, but it is still very cool nonetheless!

Also, Mr. Toriyama has even created an original character named Bonyu, who was a former member of the Ginyu!, who will make her debut in a side quest.

Though all of this is great, the producers note that the game isn’t strictly open world in a sense, but there will be several vast areas throughout that you will freely be able to explore. As you progress through the story, more areas will become available, for instance, if you watch the IGN footage via the link further up, you will see that you can traverse that area freely, but by flying upwards, you will eventually open up a world view, where there are different areas you can choose and fly straight to (as seen below).

During the first trailer, we also saw Goku training with King Kai, on his planet, as he does during the Saiyan Arc. Meaning we will get to experience Goku’s journey in the afterlife, while his friends train on earth to prepare for the arrival of the Saiyans.

Recently, we have been shown a picture of Goku being taken to see King Yemma by Kame, so it is highly probable we get to traverse Snake Way! 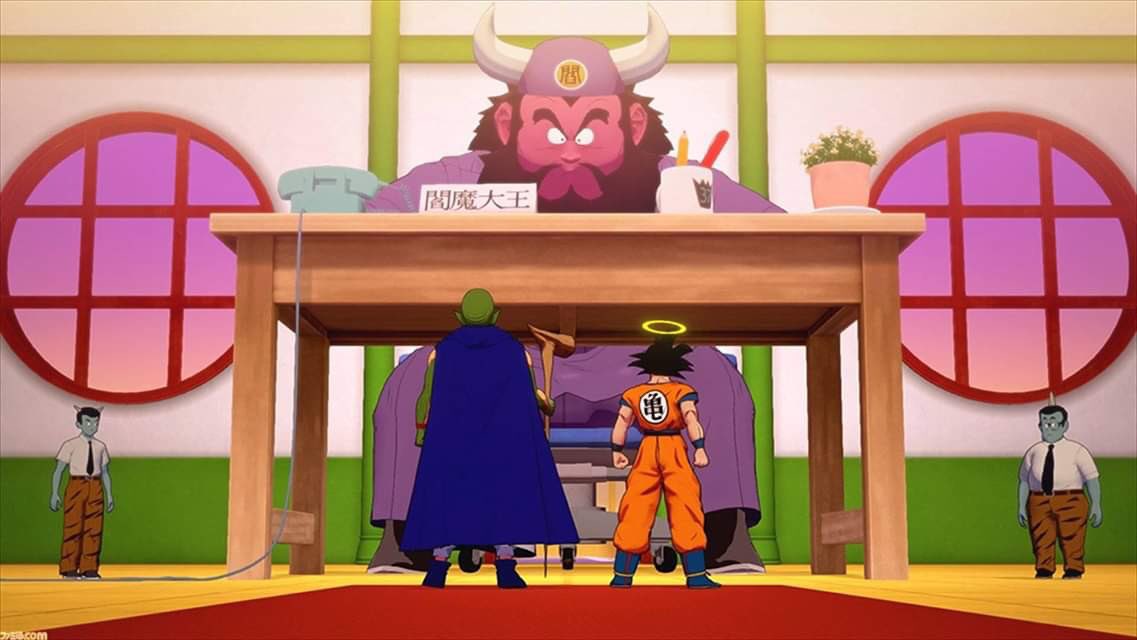 Gameplay
With the focus this time on immersion, the producers want to give the full experience in the most faithful way possible. This is demonstrated in the gameplay, as at the start of the game, Goku won’t have all of his moves, this way, they could immerse the player into what Goku is feeling during these moments, like when he learns the Kaio-ken from King Kai, for instance.

The battles in Dragon Ball Z Kakarot play a lot like a typical 3D fighting game – as far as gameplay goes anyhow. You’ll have a button for melee attacks, a button for ki blasts, one to charge your ki meter, and then there are a choice of special attacks available (by tapping the shoulder button) – to start off with, Goku’s signature Kamehameha and a meteor smash.

There will also be training elements, such as Goku schooling Gohan during the Cell Arc in the hyperbolic time chamber.
Also, the relationship between Gohan and Android 16 will be explored like never before, and we learn more behind Gohan’s epic transformation against Cell.

Playable Characters
Though the game is titled Dragon Ball Z Kakarot, we won’t just be playing as the titular hero. During the Saiyan Arc, for example, you will also play as Piccolo and Gohan, whilst Krillin, Chiaotzu, Yamcha & Tien Shinhan will all be support characters.

In Namek, you will get to play as the Saiyan prince, Vegeta! (as well as the two named above).
During the Android/ Cell Arc, you will also play as Future Trunks! The Cell Arc was confirmed at Gamescom with a new trailer.

That’s all for now. With regards to further information, there will be a trailer and LIVE stream from Tokyo Game Show.
September 14th, Bandai Namco Entertainment will be showcasing DBZ Kakarot on the main stage, which will stream on YouTube and Periscope at 07.15 – 08.00am BST.

What could we see? perhaps more info on the Android Arc, as I feel, with at least another 4 months or so until release, it is likely too early for them to show us any of the Majin Buu Arc – which has yet to be officially announced, but the English voice actor for Goku, Sean Schemmel let it slip during a recent interview that the game will cover the arc from beginning to end.

Be sure to check back – we will report on any further news as and when it happens.

Any cookies that may not be particularly necessary for the website to function and is used specifically to collect user personal data via analytics, ads, other embedded contents are termed as non-necessary cookies. It is mandatory to procure user consent prior to running these cookies on your website.